You are here: Home / Merry Musings / Thinking / Gendered Play. It's just an observation.

I’m bringing up a boy. It’s new to me (more or less) and he’s different. I have no idea if he is a typical boy, or atypical or where he fits in in the grand scheme of play. I’ve only watched girls closely before and my experience of boys (many of whom I know pretty well) was to shudder slightly at all the hurtling around and wrestling that went on. Or x-boxing; I could cope with that. I’ve watched four girls though, all feeding off each others habits as they grew up side by side. They had all the toys, in all the combinations – when you have 4 children there are a LOT of birthdays and Christmases.

They had cookers and castles and picnics and trains and cars and dolls and ogres and princesses and pirates and books and Lego and Playmobil and bikes and prams and anything you can think of that wasn’t mentioned in that list of traditional toys. We own a toy shop. That’s what happens.

Fran dressed up as princesses, in pink, loving Dora, determined to be Wendy, always playing Mummy. Maddy was always Peter Pan, loved Lego, wore blue, played with the boys, seemingly determined to counterpoint Fran’s utter ‘girly-ness’ with blue. She was grudgingly sucked into The Princess and the Pauper and flirted with the blue dress rather delightedly for a while. But she is the one who accompanies Daddy to car races, likes to find out how things work. Amelie and Josie did not fulfill such poll opposite stereotypes, for whatever reason. I use the word with intention – Fran and Maddy, despite a free mix of toys, options to play equally (and given their home ed world it was a more than averagely gender equal environment) and parents who offered up ballet and rugby perfectly cheerfully, simply fell down on two sides of an age old divide. They outgrew it by and large and don’t appear to be anything like so different now, but it was clearly there when they were children.

To be clear, I have singing, dancing, gymnastic, taekwondo-ing, rugby playing girls who almost entirely dress in trousers. From his first 2 years, Bene seems to have leanings towards dance, gym, singing and ball throwing, with some added kicking and hitting thrown in (no inclination to skirts so far but given he never sees anyone in one, probably not surprising). I’m calling that upbringing, a range of activities offered up on an equal basis and taken up as per inclination of self, not gender role playing.

I hate gender specific toys and resources – I’ve written about it before and I stand by it. I may sell toys but I despise ‘pink for a girl’ – my son uses the pink pushchair we happened to have in the house for his doll and my girls have had non gendered dressing up as often as Disney dresses. I’ve never uttered “that’s a boy toy” or “that’s a girl toy”. I wouldn’t. It doesn’t interest me. At every trade fair I go to, I talk long and hard about suppliers steering away from PINK. I believe in PinkStinks.

They play differently. MY CHILDREN play differently. The girls DID have variations in play; some have been more maternal, some less imaginative, some more boisterous, some with leanings towards traditional perceptions of gender specific play. But within a range, their play was broadly similar – like it or not, if I look back I know our trains tended to play in train families, the Lego tends to make homes and families, the dolls are parented and sent to schools, the oven is well used to play cooking games (though god knows they never see me cook!) Little toy cars were mummy and daddy car and sticks still become Swallows and Amazons camp fires, tents and flags. All that said, Katniss and the Amazons are firm favourites as role models for games, as are Annabeth and Zoe Nightshade.

And Bene is different. He crashes cars. He makes the longest train possible and then drives it off the stairs so it crashes to the bottom. He throws EVERYTHING. He kicks EVERYTHING. He is obsessed with pirates and has 15-20 words for vehicles. He’s insanely good at jigsaws with an uncanny knack for spacial perception that far outstrips anything I’ve seen in any other toddler, never mind my girls. But without any apparent schooling, in a house where most of the toys are his sisters’ toys and in a house filled with films his sisters picked out and filled, on a 5/2 ratio with women, he slides outside the tolerance of difference his sisters range across. Sticks are for hitting things with and in the basket full of plastic castle figures, only the knight, the ogre and the dragon are interesting. I didn’t teach him that. There are relatively few outside influences to do so; he doesn’t watch much TV and nursery is set up to allow neutral play. 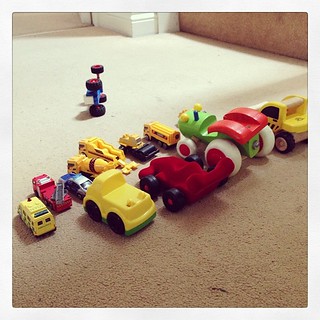 If I post a picture like this, captioned “You know you have a son when…. (This never used to happen)” I can promise you my statement is not “Only boys line up cars or play with cars.” I own a toy shop; people phone up for garages for a girl and dolls for a boy all the time. The trains and cars in this house used to belong to girls. I’m just saying, off the cuff, on the hoof, in a moment of amusement that THIS boy, this one here of mine, plays differently to the FOUR GIRLS I have also had the privilege to bring up.

It’s not a political statement as such, it’s just an observation.