Poor old Bene has been suffering from Chicken Pox this week. I say suffering, but in fact he’s been remarkably well with it really; we thought we were going to get it a few weeks ago when my nephew was here for a day the day before he went dotty but he missed it then, only to immediately pick it up at nursery, where half his room currently look like Dot Man.

I’m not sorry to be seeing chicken pox for the last time. Josie had it in 2010 and the other girls had it years and year ago, all in one go (though inconsiderately spread across an entire summer). It’s a vile, horrid virus that people don’t take nearly seriously enough. It can kill, it scars, it can turn nasty very quickly, it has all sorts of complications that people are completely under informed about. It horrifies me when I hear people talking about having pox parties, I would never want to deliberately infect a child with it.

Amelie had chicken pox in combination with eczema and impetigo and ended up in a devastatingly bad way in hospital. We were lucky not to lose her in all honesty. You can read about it in this post here. Even Josie managed a complication when he eye developed a limbitis on her eye. All very annoying. 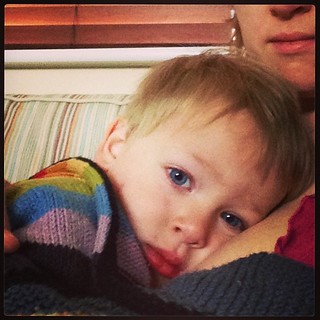 Fortunately (touch wood) aside from a few of his spots being a little infected (cream being applied vigorously), Bene hasn’t had a terribly bad time of it. I know he had a spot on Tuesday but I had no idea what it was, PICKED it on Wednesday thinking it was either a tick or a slinter because it looked so odd and totally missed the 2 that must have been on his back until Thursday night. Friday he got a few spots, Saturday he got lots and was a bit sad and Sunday he got quite a lot more. He has hardly any on his legs and arms but lots of his face and a good number on his back and front. Probably 150 altogether or so. The ones on his face as worst; they are going to scar. 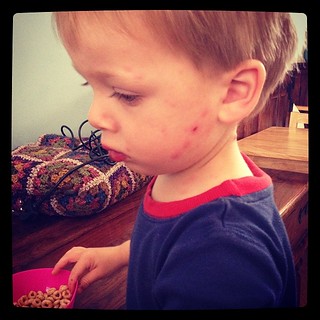 They’ve got worse since this photo 🙁

I really rage at this virus, it feels such an assault on them. I can never be calm (though I’ve done quite well this time) in case it suddenly does something awful again. It makes me so mad all of them are marked by it. 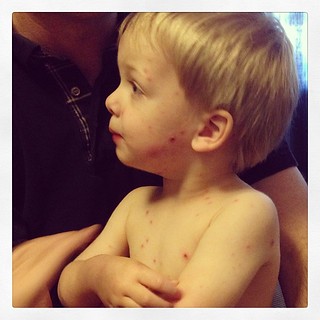 Still. Could be worse. And now, hopefully we are done.