You are here: Home / Being a Parent / Connecting. They were children.

Parenthood is a funny old thing. (Understatement.) It never settles in one place, I find. Perhaps that is having lots of them or perhaps it isn’t. One thing I can’t know is how it would feel to have not had lots of children.

When Fran was little I used to stare at her as she eyeballed me and deliberately trashed some toy or jigsaw or game. I had no idea how to connect with her, no idea how to entertain her. She was like nothing I had ever been, full of energy and noise and needing constant attention. I felt frustrated and confused and resentful of the impact she had made. I had postnatal depression and it is easy to blame it on that but I think we just took a long time to collide.

Now we can talk for hours; I might not do her sport but I love her sport, we read similarly, think and empathise similarly. We are extremely different but hardly different at all.

When Maddy was little she was still and compliant (if she wasn’t in a rage filled tantrum). She needed and loved and adored me and I was tiger-like to protect her. I had no idea what was in her head and an instinctive feel for what she needed. For a long time she was by my side constantly, closest to me in many ways. She loved to act, as I had done, the most likely to be creative and so that was what we did together. While Fran’s energy aligned with Max, Maddy was my bedfellow – until suddenly she wasn’t. In among the rugby and TKD, I lost her and for a long time  we seemed to me to have only love in common.

I was thinking today, as she and I sat discussing reincarnation, fate, writing, music, fiction and belief, how strange it is to have her come back to me. She left the girl behind and this singing, guitar playing, talented writer with abilities that are all hers and a confidence in her self that has emerged from deep inside her and out through her skin, is something new. Yet I know her, as I always did know her. Suddenly we have so much in common again and she is so interesting; it’s as if, more than Fran, she disappeared into a chrysalis I couldn’t quite find her in and has now emerged all fully formed and remarkable. Funny, quirky, clever.

It never feels as if the younger two will do this to me; Josie has always been easy enough, if very locked away and just lately she is growing into a person I expect, more or less. She’s quiet, but funny, very focused but with a curious disassociation from  her passions, that seems to come from an inbuilt perspective. Perhaps that was what Freddie did for her, from an early age. Taught her not to get excited in case something doesn’t go as she wants. A useful lesson, if a little sad to have learned. And Amelie has always felt like parenting an atom bomb; brilliant in make up, insanely clever, devastating impact, enormous but often a flash in the pan. I’m so used to her being complicated that she rarely surprises me, even if I still have no idea how she’ll turn out or what her path will be. She’s hard to read, despite being so open.

I suppose the younger two will suddenly be young women and I’ll look back at this and wonder how I couldn’t see who they were becoming. And as for Bene? Who can say? 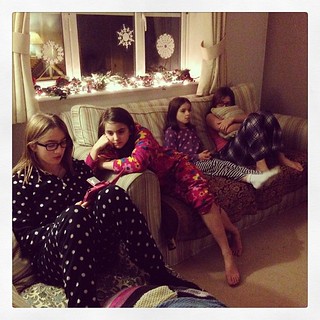 (It’s been too long since I took a picture of them all together, clearly!)