You are here: Home / Family Life / Freddie / Those days.

I’ve back dated this because it feels wrong to have it not on the ‘day’ that Freddie died, but it has taken me a week to write it. Truth is, I’ve not wanted to write it and because I didn’t want to write it, I haven’t written anything. It’s been a silent April.

The words don’t really come any more, nor do the feelings. But although they don’t, this April was probably the worst since his first birthday and without friends and family, I’d have really sunk.

I longed for this level of peace, of being able to exist and cope and go on but now I have it, it is a painful state indeed. And painful because it lacks pain. I cannot think of a better way to describe that.

I taught myself not to mark every Friday because he was born on one and every Tuesday because he died on one. I decided if I let myself indulge in that (and for me it would have been an indulgence), I would go mad. I had to not make life about him. For the first couple of years I struggled deeply with Good Friday but it hasn’t held sway since. I don’t think like that. I mark the days of his life because if I lose that, I’ll lose him totally. I just couldn’t go on filling the days of April with more meaningful grief days. I’m at peace with that choice.

And this year it was hard to mark them. It was the Easter holiday and people were happy and I wanted to enjoy them but Bene got ill and distracted me deeply with worry and late nights. Some nights I forgot to light his candles. I beat myself up with guilt about recovery and lack of tears and lack of time and other worries. We barely said his name. I put on a brave face. I was angry, really angry and resentful of Bene, my rainbow baby of recovery, for being ill and stealing my time for remembering Freddie.

None of that really makes sense.

People say all the time “how did you survive this? If my baby died, I’d die too”. Now I’ve stopped hearing “you aren’t sad enough, you must not have loved him as much as I love my babies” I have a different understanding of this statement and something new to answer.

I didn’t survive. I simply didn’t survive. My body came home and it kept walking and talking and mothering and doing things but the person I was before just didn’t survive. She’s gone. What’s left is fine, functional, operational, possibly even preferable – but not the same. Not just altered, scarred and recovered but actually something new. Most of what I once was is no longer there and one of the things I often wonder is whether I will get to be alive long enough to become a whole version of this new thing. This new thing can cut everything loose; she needs less love, less friendship, she walks away from people who hurt her and she can’t really be bothered to forgive, no matter who they are or what they did. She’s just not got the level of giving a fuck that the old one had. It’s a shame really. I do wonder if at some point she’ll grow up a bit and get a bit kinder and more tolerant but right now she’s an awful lot too raw to do it. Unformed. Unformed at 40, when tolerance and caring much what other people think of you starts to get a bit of a shiny, repellent surface anyway, is a dangerous thing. A lot of water can roll of my back right now because under the surface takes all my energy.

I’m gradually realising that a lot of that comes from the fact that vast tracts of my emotions are still in shutdown. I have no idea if they’ll come back. I’m not particularly invested in finding out. 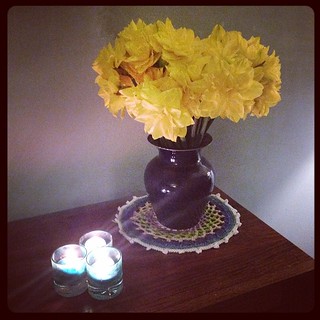 It’s a strange thing to worry about. But once you’ve watched your child die and effectively died emotionally yourself, everything else slides quite a long way down the graph.

That’s where I am right now.