You are here: Home / Everything Else / Reviews / The boy and his bike.

Over the last few months we’ve been reviewing a Little Tikes 4-in-1 Trike for Bene. I decided to put it through it’s paces first before reviewing as to start with he was inexplicably bothered by pedals and it took him a while to cope with it at all. He’s not quite at the point of pedalling for himself and he’s still too young to propel a fairly solid bike on grass himself, so we gently carved out a way of using it that he’d be happy with.

We consoled Daddy, who had spent the requisite amount of time putting it together (nice and easy with clear instructions, a minimum of fuss and faff and a solid bike emerges at the end of the flat pack procedure) and waited for the right moment. 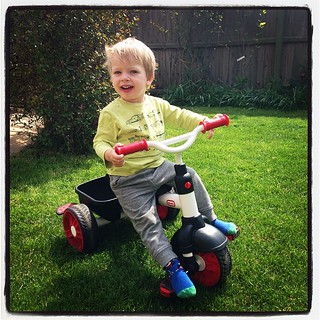 As sun finally began to grace the garden, the boy realised that his bike was in fact quite a lot of fun. Shortly after discovering it was fun, he discovered that the little trailer was the perfect size for Max, his Rubens Barn doll, who then spent a lot of time being driven around the garden, variously with or without sister power grudgingly applied to push him along. 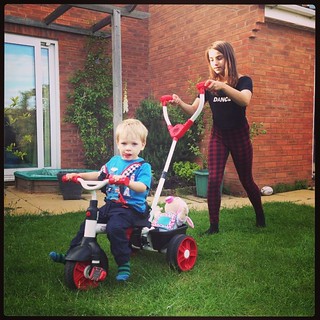 It’s a multi function bike and I was quite surprised to find that we didn’t in fact make the best use of it in the most grown up form. It CAN be used as a very first bike, with footrests, sun shade and seat positions of all types and heights. For Bene, the set up that suits him best is pedals that turn but that aren’t required to power the bike and the handle to push the bike along from behind. I love that it is so versatile; you can easily disconnect the front element from the back so the parent/sister can be in full control of powering the bike and the direction it goes but the child can ‘steer’ and have the sensation of resting feet on moving pedals. And the discovery that he would tolerate the handle came at the perfect moment for us too, as it was round about this time that he decided pushchairs were for wimps. What had been fun in the garden… 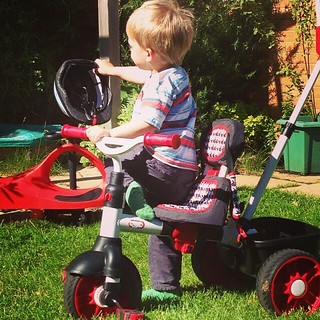 …suddenly became essential for going to the shops! 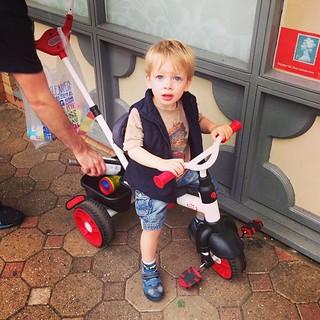 And he LOVES parking up and putting the shopping in his trailer too 🙂 The bike has saved this element of life for us really; no one like wrestling a screaming toddler into a pushchair but I am not emotionally suited to slow dawdling walks to the shops. This is the perfect way to get him there happily but at some speed and because it has a harness, like his Daddy-bike seat which he approves of and wears happily, we don’t have to worry about him suddenly lurching off and running into the road.

It also means that trips to the playground are fun… 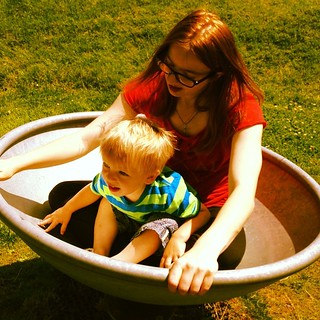 …especially if sisters take you there… 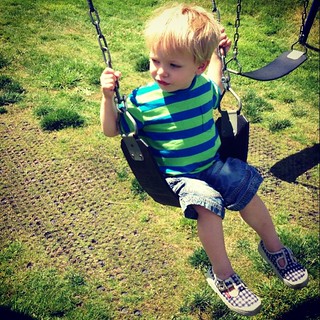 … but coming home afterwards is not the end of the world.

Overall, we’ve been hugely approving of this Little Tikes 4 in 1 Trike despite our slow start with it. It’s rugged, easy to put together, has lots of safety features, has flexible uses and will last him well beyond being 3. Thanks, Little Tikes 🙂

Disclosure: we were sent the bike to review and there is an Amazon affiliate link in there too.